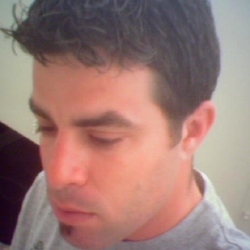 Founder of San Jose's Resource Records, the house oriented Jump Recordings, electro- breakbeat ladden Particle Music and Prime distributed Refined Music, Chris has been all about percussion and groove since first playing drums at age 4. Chris' strength lies in his versatility as a producer/ DJ and a talent for no-bullshit dancefloor music. His earlier releases with their looming basslines and percussive focus have become an underground staple, and he continues to advance on multiple fronts. Also be sure and check out his sweat inducing DJ sets in the download section below!!

Returning to his roots and passion... in May of 1996 Chris Jackson dove back into the electronic dance scene, playing a harder, more aggressive style of Tech-House and Techno. In the fall, he finally built a solid foundation with the studio he had always strived for, soon to form his own record label, Resource Records. His first 12" Resource Raw Materials, was released in the summer of 97, with a deep funky electronic feel. In the fall of that same year, he collaborated with E.B.E. [Lucas Rodenbush] for his second e.p. titled Resource meets E.B.E., on which they each produced two tracks. In 1998 Chris Jackson combined efforts with local friend and producer Jaz to create the first release, Selected Sessions Vol. 1, on his new house imprint, Jump Recordings. Since it's first release, Resource Record has continued to make a mark in the world of techno music. Now on it's 9th release, Switch "Personality Disorder", written and produced by Chris Jackson, coming in mid November '99 is sure to keep the pattern going....strong! Jump Recordings is planning the release of JUMP-104 with famed producers/ Djs Halo and Eric Galaviz aka Dj Hippie before the end of the year. Also in the works for Y2K is JUMP-105, a brand spankin' new effort written and produced by JAZ and yet another installment in the highly random Silicon Sampler series RESO-010, "Silicon Sampler v2.4", with tracks by Chris Jackson, The Rhythmist, Mutor and Twerk. The fruits of Chris' labors and creations are beautifully captured here and recognized on this cd brought to you by the rapidly growing Journees Music, the hottest new, independent Electronica label in the US.

Here's what Kurt Hilbert (Bellevue, WA) has to say about Chris' Refined cd... "It's good... like slower grooving tech-house... wierd & hard soulfoul instrumental acidic music! Music that has one mindlessly dancing trance-like without chemicals or booze but not Trance."

save me a slice

Other Chris Jackson Reviews (in brief):

Synergy [FL.], Nov 97, page 43 RESOURCE MEETS E.B.E. Freaky, filtered, and completely fucked up would best describe the second release from Resource Records, the California based techouse label. This time out Resource's main man Chris Jackson teams up with Lucas Rodenbush of E.B.E. fame for a four track e.p. of deep, tracky, funky tech madness. These tracks are both minimal and meaty with a good dose of metallic pings and pongs. -JN

Magic Feet [UK],Nov./Dec. 97, page 22 RESOURCE MEETS E.B.E. Outta San Jose, California, this is a fine EP of ultra-deep trackmatics on the tech-house tip from Chris Jackson (Resource) and Lucas Rodenbush (E.B.E.) and the label's second. 4 cuts, all of which gots to get up and groove and well worth searching out for disciples of the sound. -TD

XLR8R [SF.], Jan./Feb. 98, Techno reviews RESOURCE MEETS E.B.E. Resource's second 12" is a slamming chunky techno four tracker with the emphasis on minimal mixing grooves. All the tracks are well produced , with some kicking syncopation in the rhythms, and totally DJ friendly. With the wealth of talent in San Jose, these guys are definitely leading the charge towards greater respect and recognition. -Andrew Rawnsley HEARSAY, TECHNO RAMBLINGS San Jose's Resource Records follow up the excellent "Raw Materials" EP with "Resource meets E.B.E." Chris Jackson and Lucas Rodenbush of Solid Trax each contribute two tracks, with "Unleashed" and "Pneumatik" rising to the top. - Jon Williams

Wax [UK], Aug 98, page 68 CHRIS JACKSON 'Raw Materials Vol.2' Based in San Jose, California, Resource Records release their third 12". Four funky, metallic cuts of crisp yet warm production that are currently getting hammered by DJs worldwide. 'Raw Materials Vol. 2' sees Chris Jackson pick up where he left off. A must buy for all alert vinyl junkies!

Wax [UK], Nov. 98, page 76 CHRIS JACKSON 'Industrial Espionage' You won't have heard much like this recently, but it signals a new label to keep your eyes on. Chicago style, but not. US techno, but not. It's all a bit sketchy to describe at the moment. A few more releases and we could have a monster new label on our hands. Exciting, eh?

Mixer [NY.], Dec. 98, page 93 CHRIS JACKSON Industrial Espionage From San Jose, the Resource label respectfully focuses on its own interpretation of the U.S. techno sound. You won't have heard much like this recently, but it signals a new label to keep your eyes on. Chicago style, but not. U.S. techno, but not. It's all a bit of a mouthful to describe actually apart from the simple drum-laden structure with a selection of pshchotic bleepy sounds on the side. A few more releases and we could have a monster new label on our hands. No, what am I talking about. -Mark EG

Fix [LA.], #26, 98, 12" techno reviews CHRIS JACKSON Industrial Espionage e.p. This hard-ass selection of left coast tech trax finds Chris Jackson's San Jose based Resource Records on their 4th release and should hopefully explain to latecomers why this man is being wooed by everyone from Minnesota to Sweden. You know why west coast techno is the best? Because there's always enough funk to fill the whacked-out spaciness of that rave-grunge-techno and make it accessible to more forward thinking dancefloors everywhere. Mr. Jackson if ur nasty. -Daeman

Matter [FL.], Jan. 99, page 38 Chris Jackson is soon to release his fifth Resource release, "The Accomplice/ Hiding Out". My favorite tracks are the groovy and knocky "In the Shadows" and the elusive "System Abuse", a dark electro track. In February, Resource Records plans for a Silicon Sampler with tracks by Mattski, The Rhythmist, myself and Chris Jackson. -LR

Matter [FL.], Jan. 99, page 44 THE ACCOMPLICE "HIDING OUT EP" Resource main man Chris Jackson dishes out another slice of pure techno trax for his California based Resource Records. This 4 track ep with the titles unknown to me will play a serious role in my underground sets, especially the inside tracks. This type of minimal techno has made Resource a serious west coast label to watch! -J.NICKERSON Lotus [LA.], Issue 18, 99, page 59, guest dj picks TECHNO 12"s BY "THE ONE AND ONLY" FRANKIE BONES Chris Jackson/Key Suspect/ Sonic Groove/US If one record could define a sound in a store full of thousands of others, then this California producer leads us into the new millennium with some next century shit. Close to perfect.