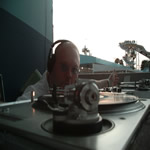 The Club at Firestone, The Edge, The Beachum Theater, Marz...- many institutions of electronic music have risen in the southeast music scene, and one DJ that has played a part and gained immeasurable respect in all of them is DJ Rob-E. Over the last twenty five years, he has moved thousands along a musical spectrum of bass,funk, alternative, hip-hop, and the most upfront electronic music. His talents as a DJ and producer have earned him accolades through his career and he shows no sign of slowing down during the new millennium.

Rob-E's musical specialty is undoubtedly breaks. He has continuously slamed out sets full of funk at his Florida residencies and all throughout the United States and abroad. Club goers have flocked to experience his sets because they have witnessed him before or recognize the name from his nationwide CD releases. The first, Orlando Breakz captured Rob-E's signature sound and sold over 15,000 copies. His second contribution to the series, Orlando Breakz Volume 2 shot off shelves faster than the first. It has sold 60,000 copies and continues to sell five years later.

Just like Orlando Breakz Volume 1 and 2 , Rob-E realized success as a producer in 1995 . His self-produced single, "Let the beat control your body " was an immediate smash hit in the clubs and was licensed to over 12 mix CD compilations. His second single, "Listen" was just as big of a hit, Being licensed to noumourious compilation CD's including Streetbeat, Journees' ElectricAcidFunk 3 and Ink 19 Magazine's "The Best Florida Artists of 1999".

Rob-E's accomplishments and experience have already eclipsed many DJ's dreams, but he continues to tirelessly expand and intensify his universal appeal. Now teamed up up with musical mastermind DJ Security they are traveling from coast to coast droping the new era of breakbeat. They have also done remixes for the now defunt Funkwax, South Beach Underground, Numatic records, Yes Mate and Ministry of Sound as well as being active members in the global underground movement.

For over twenty five years, he has proven his ability to sell, produce, and make thousands upon thousands dance. His accomplishments have solidified DJ Rob-E as a major force on the dance floor. If the past is any indication of the future, expect him to continue inspiring dance floors into break-beat ecstasy. However, now with The Fundamental Breakz Collective it may be one of his tracks making you move while he is not even in the building. Keep your eyes and ears open, for DJ Rob-E is behind the tables and in the studio and coming soon to a nightclub near you!